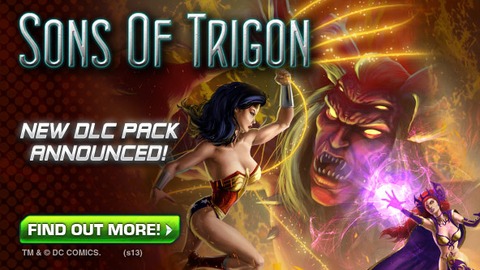 Sons of Trigon picks up where the Sins of the Father storyline left off. Through blood ritual, Trigon had escaped his dimension and was preparing to attack the Earth. However, in secret, the Sentinels of Magic had prepared a contingency plan and created a barrier between our realm and his. Now trapped between worlds, Trigon’s evil burns like fire, creating a nightmare version of Gotham City – a torturous plane that exists independently to the mortal plane. Circe and Wonder Woman race to confront Trigon and his newly-revealed sons on a mission for power or peace.

New Shared Space: Gotham Wastelands
A fractured wasteland separated into five districts warped and displaced by Trigon’s hellish influence: the Mausoleum, the Cathedral, Amusement Mile, Knightsdome, Villain Stronghold, and Hero Garrison. Players with a Combat Rating of 84 or higher are granted the mission “The Sons of Trigon” to enter Gotham Wastelands. Once there, pick up missions and take a tour of the Gotham Wastelands!
Combat Rating: 84

New Daily Solo Missions!
Villains and Heroes have access to Repeatable Daily Solo Missions in areas controlled by the forces of Envy, Lust, and Wrath. Completing five daily missions in each of the sin-controlled areas allows the player to access an additional random side-boss in the Duo associated with that area.
Combat Rating: 84

New Weekly Mission!
Bring a group of experienced friends and try to defeat Raven’s Soul Projection in the Gotham Wastelands. Heroes will battle Raven’s Evil side, while Villains will battle her Good side!
Suggested Group Size: 4 or more
Combat Rating: 84

Gotham City and Metropolis Abduction Encounters
Now that the Sons of Trigon have been revealed, Zatanna and Brother Blood’s Abduction missions have been updated to reflect the knowledge gained.

New Alert!
Players receive a new Tier 5 Alert!
Open your On Duty Menu and look for “Trigon’s Prison” under Tier 5 of the 4 Player Tab.
Combat Rating: 86

New Legends!
Donna Troy and Cheetah make their debut in Legends PvP and introduce the first speedster to DC Universe Online’s Legends roster! These new Legends can be purchased in-game with Marks of Legend at the Legends Terminals in your HQ.

New Power Type: Celestial!
Create a new character and choose Celestial as your Power or choose “Eclipso” or “The Spectre” as your Inspiration. Players can also purchase a Respec Token: Power Type in the Marketplace.

Celestial Powers have two trees: Blessed and Cursed. The key to effective play is to achieve equilibrium through spiritual balance combos. This new approach to healing focuses on boosting your healing based on your damage output, so get ready to throw yourself into battle to aid your companions! Celestial Powers grant Healer role at level 10.

New Base Items!
Collect new base items by participating in Sons of Trigon content.

·The Mail and Broker Terminals in each wing of the Hall of DOOM and the Watchtower have been moved to be closer to the banks. This is to improve performance and player relevancy.
·Players who’ve used a Character Name Change Device will once again be able to correctly interact with items they listed on the Broker before using the device.
Character Creation

·Corrected an issue causing the player character to use a jump animation during character creation.

·Fixed a visual animation bug caused by abilities executed immediately after breaking out of an encasement.
·Critical HIT bubbles have been restored. Players have the option to toggle this off with an option under Settings>UI>Show Critical Hit Bubble.
·Vehicular traffic in Metropolis and Gotham City should no longer move faster than normal around street corners.
·As the age of sin begins, demon NPCs in Metropolis and Gotham City have had their colors and materials adjusted to more closely match the demon NPCs in Sons of Trigon content.
·Item: Demon Figurine: Player combat visual effects and animations should now play properly while in Demon player form.
·Resolved an issue where the camera turns in the wrong direction when exiting movement mode after watching a cinematic.
·Fixed an issue causing visual effects to not play when consuming colas.

·We have changed the way loot is dropped for players in Origin Crisis and soon to be released Sons of Trigon content. This affects multiplayer PVE content only, i.e. Duos, Alerts and Raids (and their Operation counterparts).
·Players that defeat a boss or sub-boss will get their own loot that is separate from other player's loot, meaning players will instantly receive their loot and will no longer roll against other players. This includes items that are not guaranteed to always drop such as Research and Development plans or Utility Belts. Some players may receive these items from a boss, while others might not.
·It is important to note that items dropped from regular non-boss NPCs are not included in these changes, and will be rolled on by the group as they do currently.
NPCs

·Fixed animation bug where NPCs would walk funny when using a slow animation. 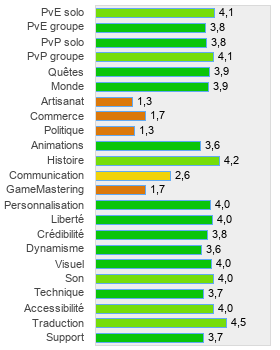